How patience has paid off for long-term investors

According to Vanguard’s 2021 Index Chart, investors who stay the course tend to be more successful in the long run than those who try to time when to buy and sell.

In early 2020, over just a few weeks, global share markets tumbled more than 35 per cent.

Sparked by investor panic over the rapid spread of the COVID-19 virus, it was one of the biggest-ever market downturns.

Yet, by the end of last year, markets had recovered most of their lost ground. What’s more, they were once again trading near record highs.

It’s only when you take a long-term view of the performance of share markets over time that you get to see the bigger investment picture.

And it shows that while markets do experience volatility and can sometimes fall quite sharply over short periods, they consistently rise over longer time frames.

Investors who stay the course, rather than trying to time when to buy and sell, tend to be more successful in the long run.

If you invest in products such as managed funds and exchange traded funds that provide broad exposures to markets, you essentially capture the rising returns from those markets over time.

The 2021 Vanguard Index Chart below shows the performance of six different asset types over the last 30 years since 30 June 1991. 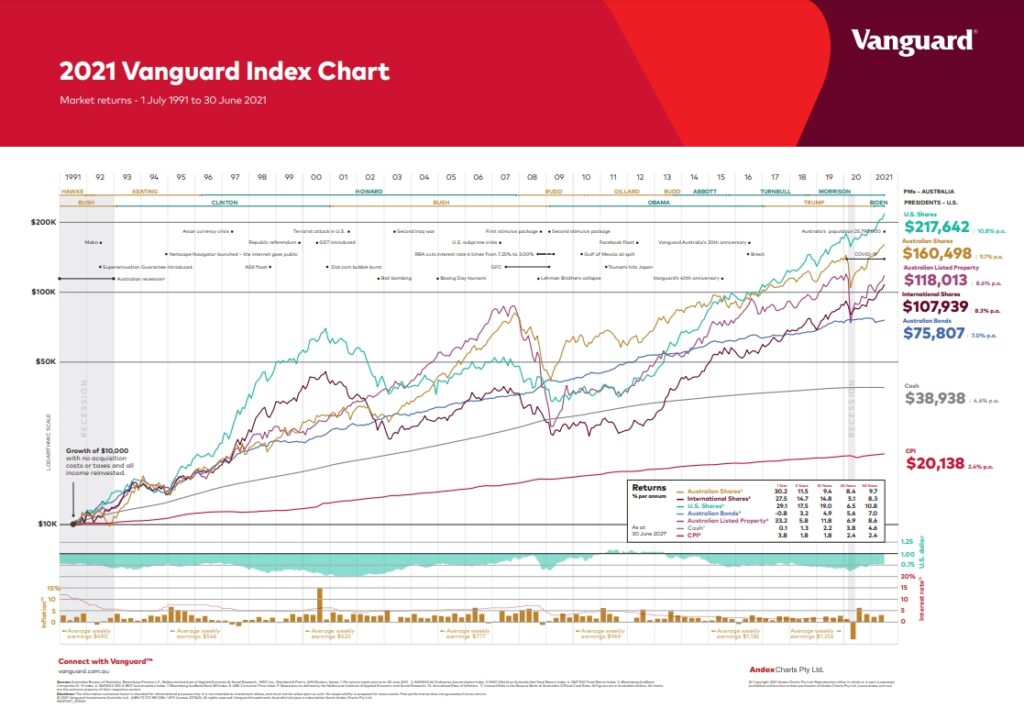 As well as mapping the performance of these assets, the chart shows how a starting investment of $10,000 would have grown over 30 years. The total numbers don’t include any buying costs or taxes and assume all the income received along the way was reinvested back into the same assets.

You can clearly see how investment markets have risen and fallen over time. As well, you can see the shorter-term impacts of major events including the Global Financial Crisis in 2008 and last year’s COVID-19 crash.

How different assets have performed

The Vanguard chart also shows how someone who had invested $10,000 back then would have ended up by investing in other asset types.

The same amount invested into Australian shares would have grown to $160,498 based on the 9.7 per cent per annum return from the Australian share market since the start of the 1991-92 financial year.

The lowest long-term return over three decades has been from cash.

If you’d left your money in cash it would have earned 4.6 per cent per annum and grown to $38,938. It’s a much lower return than from other asset types. But it’s still almost four times the original amount invested.

The importance of diversification

The returns from the different assets tracked in the Vanguard Index Chart over the last 30 years demonstrates a few key points.

Some assets are more prone to volatility than others. You can see that by comparing how different types of shares have performed over time against the more stable returns of lower-risk assets such as bonds and cash.

During times of uncertainty, shares are likely to be much more volatile than fixed income assets such as bonds. Cash returns, which closely reflect official interest rates, are largely unaffected by what happens on share markets.

You can also see that the returns from different assets vary from year to year. The best-performing assets in some years can be the worst-performing in others.

In the 2020-21 financial year listed property achieved a positive return of 33.2 per cent, which compared with a negative return of 21.3 per cent the year before.

Lastly, the best way to smooth out intermittent volatility and to achieve more consistent returns is to spread your holdings over a range of assets.

The power of compounding returns

The overall financial returns shown in the Vanguard Index Chart are based on an investor having reinvested any income received from their investments back into the same asset type.

By following a strategy of reinvesting investment distributions such as dividends, and by making additional contributions over a long period of time, the combination of market growth and compounding returns will likely deliver strong results.

Even a low initial balance will grow substantially over time when combined with compounding investment returns.